Get fresh music recommendations delivered to your inbox every Friday.
We've updated our Terms of Use. You can review the changes here.

by Gordon Grdina's The Marrow 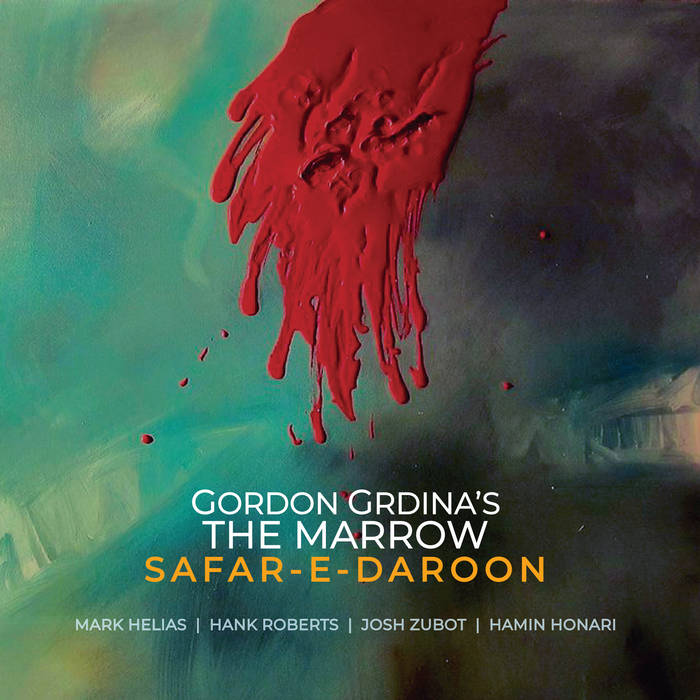 
Here is the second release by The Marrow, Grdina’s Vancouver/New York project adapting Arabic and Persian forms to a jazz approach and ethos. For Grdina there is nothing exotic in this endeavor – he’s been playing oud since he was a teenager and first recorded with it on his Songlines debut, Think Like the Waves (2006); his Arabic/jazz 10-piece, Haram, debuted in 2008 and released Her Eyes Illuminate in 2012. Haram is at heart an extravert Vancouver party band filled with avant-jazz improvisers playing the heck out of old-time Arabic pop and folk tunes; The Marrow explores a deeper level of expressive fusion between worlds by means of original compositions (some more or less rooted in tradition, others more fluid in the influences they stir together and the emotions they evoke) and performers whose intuitive grasp of the material and group dynamics is very finely honed.

As Grdina notes, “This recording carries on the development of the ensemble from where Ejdeha left off. The group is defining its own aesthetic, combining aspects of the Persian dastgah and Arabic maqam systems with free improvisation and harmonic fluidity. The band is dedicated to creating modern music that pays homage to tradition while championing personal expression. The title Safar-e-daroon means ‘inner journey.’ The group as a whole and each of the individual musicians are searching inward to best express their own experience of life, love and sorrow. We hope this music will help the listener on their own Safar-e-daroon.”

The program is organized as a sort of rough analogue to this inner journey. It starts with the title tune, the one most structured within the Arabic modal system (maqam) and which in its second half is played in the Iraqi folk georgina 10/16 rhythm. It also features an exciting oud solo. For Grdina “it’s a great send-off point for the ensemble, embracing the tradition with hints of what’s coming next.” “Mini-con” features a high-flying solo by the newest member of the group, the in-demand Canadian violinist Josh Zubot. “He plays with an intensity and fluidity that I rarely hear. He has a history with many different styles of music and is able to bring out aspects of all of them while maintaining his own voice.”

Next comes one of three pieces composed by Mark Helias, who has been collaborating with Grdina now for over a decade – another departure from Ejdeha, where Grdina was the sole composer. “I was very happy that he wanted to write for the group. We didn’t have any discussion about what to write or what direction to take the music in, but his pieces turned out to be exactly what the album needed, kind of filling in the holes that I hadn’t written. They are less Arabic sounding and stretch the oud into territory less travelled. It is a language that all of us except maybe Hamin are more familiar with. Hearing those compositions with tombak and this ensemble is exciting and gives a whole other dimension to the ensemble.” Helias also fulfills an essential role as a performer: “Due to his deep understanding of the jazz, free improv and also the Arabic tradition through his work with the Lebanese singer/oud player Marcel Khalife he creates a fluid movement on the bottom that supports while not directing and tying the music down. It retains a sense of ambiguity that for me is essential to giving the music life.”

Hank Roberts contributes a gorgeous, yearning, raga-like solo to “Shamshir,” a more stately tune situated squarely in the Arabic tradition. And Iranian-Canadian percussionist Honari is the focus of his piece “Illumination,” a composition with a peaceful vibe that is based on daf rhythmic variations and development. (The daf is a large Persian and Arabic frame-drum with metal ringlets.) “The melodic material is then developed with a sense of feeling these rhythms together without real solo sections but instead a sense of group interaction while living within a rhythmic structure.”

“Convergence” invokes the music of West Africa, not through overt combining but rather “an osmosis that brings together different influences like Boubacar Traore and Hamza El Din with a sense of folk simplicity and directness…a feeling of transcending differences and celebrating the similarities and connections between influences.” The last tune, “Gabriel James,” which sounds like a kind of pan-folk anthem, closes the circle in a fascinating and moving way. “It’s actually named after my son who was 4 at the time. We were up early together one morning, and he was strumming my oud with this rhythm and I was chording the harmony. We had this beautiful moment together where the music developed into a sort of trance where neither of us wanted to stop and we just played through the chords together for a while transfixed. This was especially poignant given the usual temperament of my son. I then wrote the melodies for the strings on top of this harmonic structure in a sort of chorale style. It has deep meaning for me and I think the band really created something beautiful out of it.”

Bandcamp Daily  your guide to the world of Bandcamp